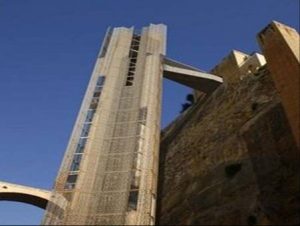 15th December 2012 – The Barrakka Lift was inaugurated by the Hon. Prime Minister Lawrence Gonzi.
This lift replaces the one that was inaugurated in 1905 and continued to operate until 1970 when it was shut down, and was then finally dismantled in 1983.

In July 2011, works started on the reconstruction of the two new lifts structures intended to provide access from the area of the old Customs House to the Upper Barrakka Gardens. The structures reach a total height of nearly 58 meters and accommodate two panoramic passenger cars having a capacity of 800 passengers per hour.
The Joint Venture entrusted with the construction of the lifts consisted of Polidano Group, Mekanika Limited and J’s Dimech Combined Industries Limited.

These were further complemented by a team of consultants – namely Alfred Grech & Associates as Project Managers; iAS Limited as Project Architects; Camilleri and Cuschieri as Engineering Consultants; and Resolve Consulting Limited as Project Supervisors for the Design and Construction Stages (PSDS/PSCS) with respect to health and safety matters as stipulated in Legal Notice 281 or 2004, Work Place (Minimum Health and Safety Requirements for Work at Construction Sites) Regulations, 2004.

Use our form to estimate the initial cost of renovation or installation.

This website uses cookies to improve your experience while you navigate through the website. Out of these cookies, the cookies that are categorized as necessary are stored on your browser as they are essential for the working of basic functionalities of the website. We also use third-party cookies that help us analyze and understand how you use this website. These cookies will be stored in your browser only with your consent. You also have the option to opt-out of these cookies. But opting out of some of these cookies may have an effect on your browsing experience.
Necessary Always Enabled
Necessary cookies are absolutely essential for the website to function properly. This category only includes cookies that ensures basic functionalities and security features of the website. These cookies do not store any personal information.
Non-necessary
Any cookies that may not be particularly necessary for the website to function and is used specifically to collect user personal data via analytics, ads, other embedded contents are termed as non-necessary cookies. It is mandatory to procure user consent prior to running these cookies on your website.
SAVE & ACCEPT